Governments count on their Investment Promotion Agencies (IPAs) to attract international investment but relatively little is known about how they go about this. Alexandre de Crombrugghe shares some of the insights gained during a stocktaking of IPAs in OECD countries.

All countries are in the business of trying to attract investment to foster job creation and productivity growth. This is why governments set up IPAs. Governments count on them to create awareness of existing investment opportunities and to attract investors that can foster job creation and productivity growth. IPAs are also expected to facilitate the establishment of investors and encourage their expansion in the local economy. While these expectations are clear, little is known about what exactly IPAs do, how they do it and how they compare to each other. 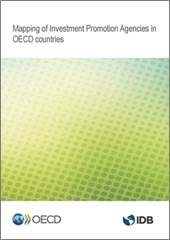 A new stocktaking report remedies this research gap. It provides comparative evidence across agencies, highlights different profiles of IPAs and explains existing trends and practices in investment promotion and facilitation. The results cover national IPAs from 32 OECD countries and are based on responses to a comprehensive survey put together by the OECD and the IADB. Further reports focusing on the Latin America and Caribbean and Middle East and North African regions respectively are forthcoming.

The report shows us that the average IPA was created 20 years ago, has 76 dedicated staff, an annual budget of USD 12 million and 19 overseas offices with an investment promotion mandate. While the majority of IPAs (60%) are autonomous public agencies, almost a third are part of a ministry and only a small minority are private or semi-private. Agencies rarely focus solely on inward investment promotion. More than half of them combine their role with either trade or innovation promotion, or both, while others have mandates that reflect the key role of IPAs in supporting economic development (Figure 1). The average agency in the OECD has almost six different mandates. 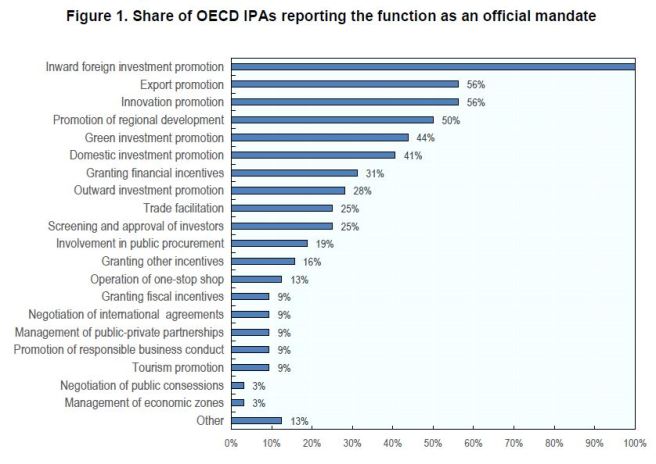 The core functions of IPAs

IPAs tend to focus their investment promotion activities on four core functions commonly categorised as image building, investment generation, investment facilitation and retention, and policy advocacy. In OECD countries, IPAs allocate the bulk of their resources to investment generation (close to 50% of their budget on average) and investment facilitation and retention (30%). Image building and policy advocacy receive fewer resources. Agencies also tend to be more active for new investors than for existing ones, as they cover a higher number of investment facilitation activities than aftercare activities. Table 1 classifies IPAs according to their activity mix: the bulk of them are categorised as Generators which means they focus on attracting new investors, 25% qualify as Facilitators and a slightly higher percentage as Balanced. Only two agencies are considered Image Builders. 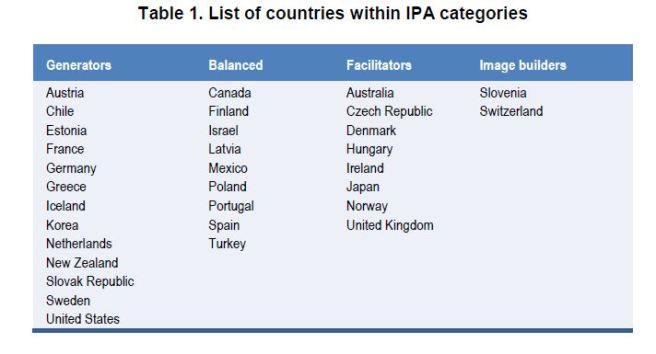 In their promotion activities, IPAs may target some investments over others either because of their higher probability of being realised or due to the benefits they can bring to the host economy. In the OECD area, all agencies prioritise certain sectors and countries, two thirds prioritise specific investment projects and over one third specific investors. IPAs tend also to target priority projects considered as “high-quality”, stressing again their intention to make investment work for their country’s prosperity. Given the complexity of these tasks, it is no surprise that IPAs that prioritise projects or investors have on average higher budgets than those that do not.

Whether public or private, IPAs are usually exclusively funded by governments and thus need to deliver results and value for money. The vast majority use customer relationship management systems to track their activities and close to two thirds have a dedicated unit. The mapping highlights that, to assess their performance, IPAs rely more on qualitative methodologies, such as benchmarking, surveys and consultations than on quantitative methodologies such as cost-benefit analysis and econometric assessments. They use both output and outcome indicators – the former measuring the performance of their activities and the latter assessing the impact of their activities on the economy – but output indicators dominate as IPAs are often limited by data availability challenges.

In order to perform well, IPAs need to co-ordinate their activities with a dense network of public and private stakeholders, including different ministries, embassies abroad, local authorities and business associations. Their collaboration mechanisms often depend on their own organisational settings. As such, while 80% of IPAs have a network of overseas offices, the great majority also rely on embassies to promote their country as an attractive investment destination. At the sub-national level, when IPAs do not have their own offices, they often co-operate with local public bodies to attract foreign investors and then to support their establishment and expansion.

Observing and understanding what other IPAs are doing and how they are doing it will help practitioners and researchers to make well-informed decisions. This comprehensive overview of existing trends and practices provides a good starting point.