As the digital technologies transforming the global business landscape reach deeper into the non-digital economy, the OECD’s Michael Gestrin and Julia Staudt look at potential implications for multinational enterprises and international investment. 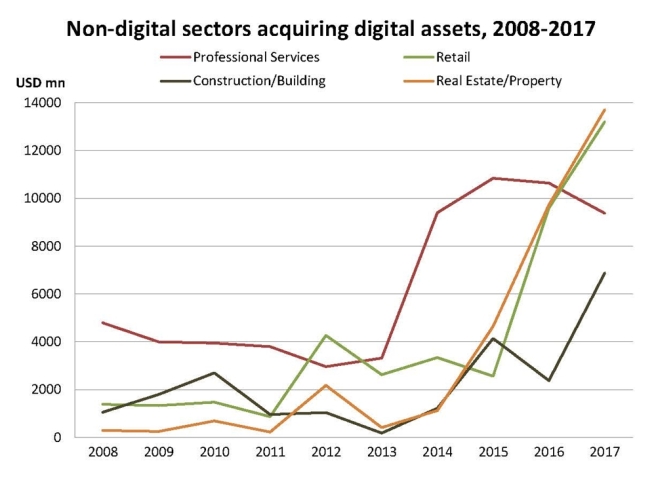 Digital technologies have had a profound impact on the global business landscape. They are generating new firms and industries, transforming business models in traditional industries, and, as a key factor underpinning global value chains (GVCs), they have reshaped the organisation of the global economy.

A recent OECD report shows that the next, long-anticipated phase of this digital revolution, involving the rapid spread of digital technologies outside high-tech and digital industries, is finally underway. This phase isn’t just about the use of digital technologies like robotics and services like cloud computing by non-digital firms. It is also about the acquisition of digital assets and capabilities – increasingly across borders – and their integration into the core businesses of non-digital firms (see figure). In other words, instead of brick-and-mortar retailers using services provided by someone else’s e-commerce platform, retailers are developing their own platforms. Instead of a tractor company using big data to design better tractors, the tractor company itself is becoming an important source of big data by equipping all of its tractors with connected sensors.

This phase of the digital revolution is less familiar to us because it only emerged during the past couple of years. Prior to this, a few non-digital firms, such as General Electric, pioneered the incorporation of digital technologies in their business models but this has now turned into a broad-based trend. Although the trend is recent, three implications for globalisation are already emerging.

Big data collection and national security – As digitalisation and digital technologies become part of the core business of non-digital firms, some of the already-known policy challenges accompanying digital technologies are likely to be magnified. For example, the collection of big data by internet players has given rise to privacy concerns, amongst others, even though a relatively limited number of firms have been involved to date. With big data collection expanding to other sectors, ranging from construction to healthcare, these concerns will grow. The controversy over end-user licence agreements preventing farmers from repairing their own John Deere tractors provides an interesting example. Similarly, just as some digital technologies, like artificial intelligence and micro-chips, have raised national security concerns, their adoption in more traditional sectors could effectively broaden the ambit of national security policy.  The blocking of Singapore-based phone chip manufacturer Broadcom’s attempted acquisition of Qualcomm in the United States is a recent example.

Policies around digital data – As digitalisation becomes a more important factor for the organisation of multinational enterprises (MNEs), digital policy is likely to play a greater role in shaping globalisation. For example, when competing for digital investment, countries must reinforce their digital infrastructure and skills. Some digital policies, however, include so-called digital localisation requirements (the requirement to store one’s digital data in the country where one operates) and rules on the use and handling of digital data.

Digital policies such as these could progressively influence international investment outcomes since they effectively constitute a new form of performance requirement applied to an increasingly important strategic asset of MNEs — digital data. In the case of localisation requirements, this can be conceptualised as an ‘obligation to invest’ since it requires either investment in, or long-term contracting for, local digital storage capacity. Potential investors may also decide to abandon the market in question if compliance is considered too onerous or technically unfeasible, as this CSIS article explains.

MNEs as vehicles for global digitalisation – The broadening adoption of digital technologies across different sectors could result in a much broader geographic diffusion of these technologies and the expected accompanying productivity gains. Just as MNEs have long served as ‘internalised’ cross-border transmission channels for goods and services, financial flows, and intellectual property, they may well increasingly serve as vehicles to transmit digital technologies globally.

Just as traditional MNEs in the past have often contributed to their own infrastructure needs in markets lacking this infrastructure, they might also be expected to contribute to building the digital infrastructure upon which they increasingly depend. From this perspective, the spreading of digital technologies to the more traditional sectors could help to counter the widening ‘digital divide’ between countries.

Although the rapid spread of digital technologies outside high-tech and digital industries is clearly underway, the path forward remains uncertain. An important reason for this is the inherent tension between the potential benefits, both for firms and for economies, of the broadening adoption of digital technologies, and the mounting pressure on governments to address concerns over national security, privacy, and other policy issues that the evolving digital economy is generating.

These concerns, while mainly legitimate, and the associated proliferation of digital and investment policy responses at the national level, could slow or even impede the broader adoption and diffusion of digital technologies in the global economy. Given the cross-border dimension of the digital economy, a lack of international co-operation to address these challenges risks resulting in digital fragmentation or, worse, digital protectionism.

The digital economy is presenting new ethical, social, political and economics challenges. Going forward, it will be critical for governments to develop policy responses, including through international dialogue and co-operation, that balance the potential boost to productivity and economic growth that digital technologies can bring against these challenges.