On the occasion of Open Government Week, (May 7-11, 2018), launched by the Open Government Partnership (OGP), Marcos Bonturi, Director of the OECD Directorate for Public Governance, emphasises the event’s significance as a unique opportunity to share ideas and discuss solutions to transform the way governments work with and for their citizens. The ultimate goal: more open, transparent and accountable policies for better lives…

No trust without transparency

We are living in an increasingly complex and uncertain world. The challenges of our times and those facing our governments include the impact of digitalization, widening inequality gaps, and a resurgent wave of identity politics. While these challenges and how they are perceived within societies are driven by complex and inter-related causes, they are all linked to declining levels of confidence. Trust in government has plummeted significantly and our citizens are increasingly losing faith in institutions. On average, only two fifths of citizens in OECD countries (42%) have trust in their national government. The OECD average has fallen three percentage points since 2007, and in a number of countries like Chile, Finland, Greece and Slovenia, trust has collapsed by more than 20 percentage points. This erosion of trust creates fertile ground for populism, nationalism and protectionism. Many citizens are now questioning the efficiency and fairness of market economies, the value of openness, the multilateral system, even the functionality of our political institutions and democracy itself. This is a critical challenge. We need to rebuild trust and restore citizens’ willingness to believe in and collaborate with public institutions. 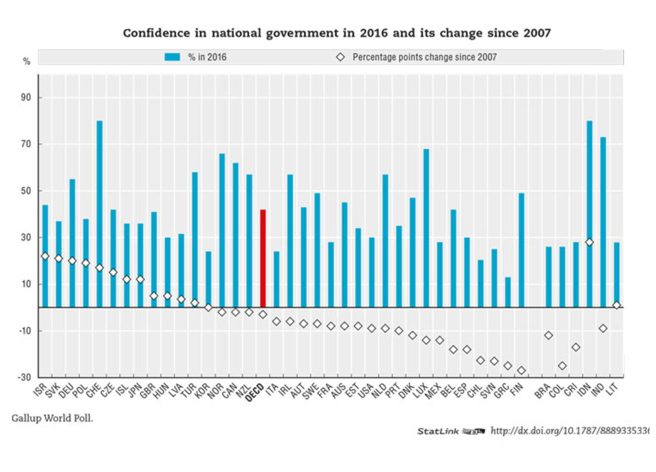 It is time to rethink the way we deliver public policies and services at the national and local level. Citizens around the world have become increasingly vocal and demanding in terms of the quality of public services but also regarding transparency, integrity and accountability of the entire public sector. In this environment, it is crucial for governments to develop and implement public policies in collaboration with relevant stakeholders in all branches and at all levels of the government, as found by the OECD Report on Open Government: The Global Context and the Way Forward. The OECD is therefore working with a diverse group of countries to advance the Open Government debate by disseminating the concept of an Open State that envisages participatory elements not only in the work of the Executive branch, but also in the Legislature, Judiciary and in independent state institutions. Citizen participation is vital to regain trust and foster more inclusive and productive growth. This is why it has been identified as one of the key principles of Open Government in the recently adopted OECD Council Recommendation on Open Government. This Recommendation is the first global legal instrument to identify the elements required to reform governance culture and enhance the principles of transparency, integrity, accountability and participation.

We need new approaches to promote participation and inclusiveness

The OECD stands ready to support governments in facing the many challenges that lie ahead. We have recently developed an OECD Open Government Tool-kit providing tangible guidance, good practices as well as in-depth policy reviews. We are contributing to building and extending the global open government community and are pleased to see that an increasing number of governments around the world choose to form part of the global open government movement. We are also building a global evidence base to support and disseminate innovations to foster a culture of open governance and raise the Open Government debate to new levels. To that end, the OECD will participate in the Open Government Week by tweeting over the course of the five days about different aspects of our work that contribute to the open government principles of transparency, integrity, accountability and citizen participation.

OECD Recommendation of the Council on Open Government