State-owned enterprises (SOEs) in the energy sector are major producers of greenhouse gases. But new research shows that they are also driving the growth of renewables, particularly in the electricity sector. Dirk Röttgers and Bill Below look at why SOEs must play a more substantial role in steering decarbonisation efforts towards the 2 degree goal.

The goal of the Paris Agreement to limit global warming to well-below 2 degrees is an ambitious challenge by any measure. To start, countries have set themselves voluntary targets for 2020 and beyond, but even if those targets are achieved, without greater ambition the world would still be stuck in a roughly 3 degree scenario. This would not be a world anyone would want to live in.

Much, but not all, of the burden of decarbonisation lies with the power sector. To keep the well-below 2 degrees target within reach, power producers would have to massively decrease carbon emissions. In the power sector, state-owned enterprises (SOEs) remain some of the most influential players, and in some countries SOEs are virtual monopolies, despite liberalisation efforts (see Figure 1). 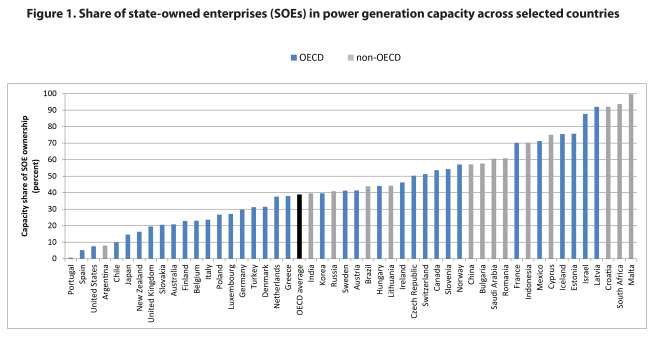 SOEs currently account for a substantial quantity of greenhouse gases (GHGs), even more than privately-owned electricity generating companies in terms of fossil fuel-based generation capacity. The combined GHG emissions of the top 50 energy-related SOEs in the world would rank third in a list of country-level GHG emissions, just after China and the United States. But, because SOEs are such a large part of the problem, they can also be an effective part of the solution. SOEs, and in many cases the policy makers that govern them, are positioned to directly influence climate-relevant decisions in the power market. In other words, SOEs can play a major role in steering decarbonisation efforts towards the well-below 2 degree goal.

The combined GHG emissions of the top 50 energy-related SOEs in the world would rank third in a list of country-level GHG emissions, just after China and the United States.

There’s more encouraging news. Between 2000 and 2014, SOEs in OECD and G20 countries increased the share of renewables in their electricity capacity portfolios from 9% to 23%. Yet, SOEs continue to invest heavily in fossil fuels–they are responsible for two-thirds of power investments underway, of which more than half are in fossil fuel-based technologies. This trend is changing, but not fast enough. Plants built today have service lifetimes in multiple decades. The result may be fossil-fuel and high-GHG-emissions lock-in, or otherwise stranded assets, should a change in policy take them off line. Following through with investments in fossil fuel technology will lock the power sector into a high-emissions future and reduce the carbon budget available for other sectors and countries.

The ability to change investment behaviour of SOEs depends heavily on their mandates. Unlike private firms, SOEs often have to mind more than the bottom line. Mandates to ensure energy security and affordability or to support employment in the sector could act as barriers to more climate-friendly investment decisions.

Now is the time to rethink these mandates and consider how decision-making in SOEs can be expanded in favour of renewables in the electricity sector. For example, renewables can be used to increase energy independence but reduce the need for fuel imports, a critical factor in energy security. Small-scale solar and wind power stations can also power local grids, supporting increased energy access. And the long-term health of the public budget might be served better if the risk of stranded assets from investments in fossil fuel technology is minimised.

New empirical evidence on state-owned enterprises in the low-carbon transition shows that SOEs are already making a difference for renewable investments. State-ownership of power companies drives investments in newly installed renewables capacity—an effect revealed only after disentangling market concentration and state-ownership, as they often go hand in hand. This driving force of state-ownership means that countries, states and municipalities with power market SOEs can directly influence the energy mix by investing more in renewable power and less in fossil fuel technologies. An important step would be to align SOE mandates with the Paris Agreement and adjust investments to reflect the well-below 2 degree goal.

Although this article focuses on SOEs, the private sector isn’t off the hook. OECD evidence shows that, with or without incumbent SOEs, many OECD and G20 power markets suffer from high market concentrations that constrain investment in renewables. Whether in SOE-dominated or private-dominated markets, market power needs to be reduced to allow newcomers to enter, bringing new technologies with them.

SOEs are in a unique position as major players in the power market with direct access by policy makers. A key ingredient of a successful low-carbon transition will be the alignment of mandates and policy coherence between financial, social and environmental concerns. The OECD Guidelines on Corporate Governance of State-Owned Enterprises could serve as a good framework to help reshape the governance of electricity market SOEs, especially with respect to market power concerns.

Print version of the blog