At the OECD’s Global Forum earlier this year, I was asked to talk about the state of play on the uptake of supply chain due diligence. To back up my talk with some killer stats, I turned to the recently published Corporate Human Rights Benchmark. This is the best available overview on human rights due diligence that also includes labour rights and, for example, standards concerning child and forced labour.

As often happens, I found good news and bad news. The good news is that a small group of companies, including BHP Billiton, Marks & Spencer Group, Rio Tinto, Nestlé, Adidas and Unilever, is taking a leadership role. They deserve praise for their efforts, despite the many challenges. The bad news is that only three companies scored more than 60% for their due diligence efforts, with the average score being 28.7%. If this were a school test, it would be classed as a ‘big fat fail’. The failure is even fatter when it comes to embedding respect for human rights in due diligence, with an average score of only 16%.

These disappointing findings are complemented by the recent Economist Intelligence Unit’s ‘No more Excuses’ study which reveals ‘a worrying degree of complacency’ within companies. Four out of five business executives responding to the Economist survey agreed or strongly agreed that their company’s supply chain was responsible, with just 2% disagreeing. The vast majority of respondents stated that their firms’ responsible supply chain standards were compliant with, or even more stringent than, government regulations and industry standards (94% and 97%, respectively). The physically closer a firm to its suppliers, the more likely respondents were to believe that its supply chains were responsible. However, the study shows that a sizeable proportion of businesses have actually allowed supply chain responsibility to slide as a priority in the past five years.

The study also reveals just how few companies are paying attention to key issues such as child labour (only 22%), climate change and carbon footprints (only 23%), and gender equality (only 28%). These results are a cause for concern, both with respect to the severity of these issues and their relevance to Asia where a majority of the companies surveyed are based. According to UNICEF estimates, for example, 150 million children are engaged in child labour globally. While the highest levels are in Africa, child labour is also a significant in emerging Asian economies. In addition, given that some of the most prominent exposés of child labour concern mining, it is disappointing to see that only 20% of companies in the raw materials sector address this issue, the worst-performing industrial group.

Governments are getting impatient

While some governments have been complacent in promoting the OECD Guidelines for Multinational Enterprises and the UN Guiding Principles on Business and Human Rights, a number of governments are getting more and more impatient.

France took the lead in 2016 by adopting a Due Diligence Law. The EU has adopted a mandatory non-financial disclosure directive that includes reporting on due diligence. Germany’s compromise in its National Action Plan was to state that if more than 50% of all German-based companies with over 500 employees have not taken credible action to integrate human rights due diligence in their operations by 2020, the government will examine further steps, including legislative measures. Some advanced economy regulators are also extending the applicability of their due diligence regulations globally. The US Conflict Minerals Rule (Dodd-Frank Act, Section 1502) and the UK Modern Slavery Act have created a worldwide ripple effect.

The fragmented transition to hard law

The legislative toolbox is much bigger now than it was prior to 2011 when supply chain responsibility was defined for the first time in the revision of the OECD Guidelines. The central concept of supply chain due diligence is a process which can be regulated, whether it is on process, substance or simply reporting.

A very fragmented transition is underway from soft law to hard law in the field of corporate supply chain responsibility at different speeds and different tracks. It is led mainly by OECD countries, and most heavily impacts enterprises in European countries. This creates at times a chaotic and constantly changing regulatory system for multinationals. 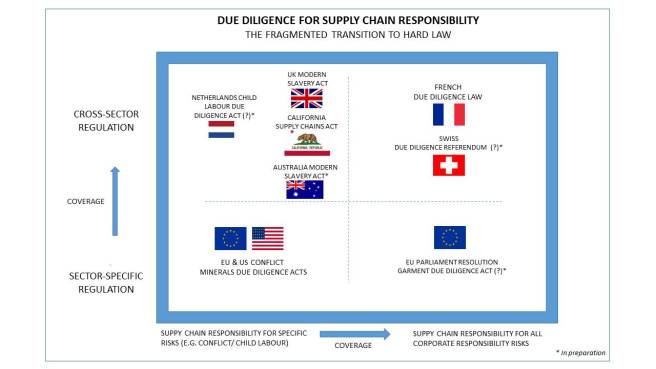 This transition is following different tracks. Some regulations focus on thematic issues, such as the UK Modern Slavery Act, the Supply Chains Act in California (slavery and human trafficking) or the proposed due diligence law on child labour in the Netherlands. Some initiatives have a sector-specific focus, such as the proposal by the EU parliament to adopt a binding regulation for due diligence in the garment sector. Others target a combination of theme and subject, such as the rules on conflict minerals. Other laws, such as the French Due Diligence Law, are much wider in scope, cover all areas of responsible business conduct and apply to all sectors. The pending Swiss referendum on due diligence looks set to follow a similar broad approach.

Hybrid multi-stakeholder sectoral responsible business agreements provide an innovative way to avoid the eternal dichotomy between voluntary and binding. Germany, Finland and the Netherlands have already signed agreements of this nature and the Swiss government is working on a similar approach with the commodities industry.

While not mandatory, these hybrid sectoral approaches may produce superior corporate responsibility results as many of the mandatory approaches lead to box ticking exercises and ‘empty’ reports. The hybrid sectoral agreements and approaches acknowledge that many supply chain challenges cannot be solved by individual companies on their own, and they are generally geared towards working together to produce real impact.

To conclude, businesses would be wise to dramatically increase their efforts on supply chain due diligence to ensure that society and governments do not get even more impatient. And, in these efforts, it is important that all parties involved – government, business and civil society – stick to the global standards of the OECD and the UN on due diligence. Don’t reinvent the wheel, but reinforce the wheel!